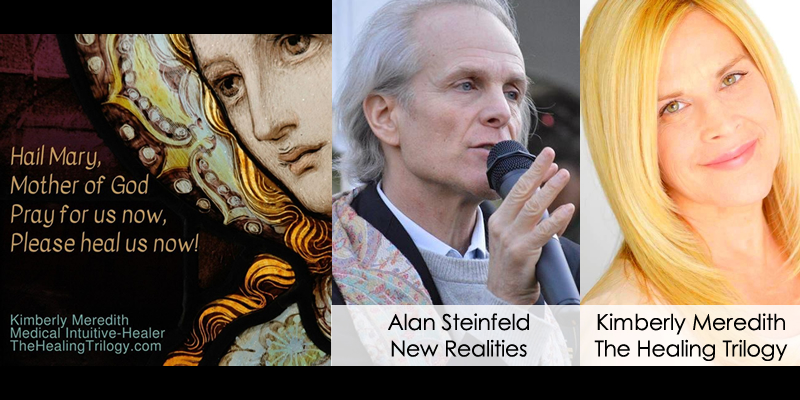 Kimberly and Alan are helping you join in the new global shift and embrace your miracle.

Love donations are accepted. Thank You!

Kimberly Meredith is a Medical Intuitive, Trance Channeler, Hands-on Healer, Spiritual Teacher and Author. Blessed with a unique array of extraordinary healing and psychic abilities, Kimberly had two near death experiences just a few years ago leaving her in a wheelchair. The Doctors told her didn’t look good and after year of rehab and Putting all her faith in the Divine, she was healed. Kimberly’s healing abilities emerged and The reappearance of her blinking eyes as child appeared once again to communicate with The Holy Spirit. She is now quickly gaining recognition as one of the world’s most gifted Medical Mediumship Healers and foremost Spiritual Speakers. Kimberly channels messages through her eyes’ blinking codes as a tool of communication from God, Mother Mary, Ascended Masters, and Angels. Kimberly is often compared to Edgar Cayce, the Father of Holistic Medicine, a Medical Intuitive, and the most documented psychic of the 20th Century.Through her healing mediumship and blinking eyes, Kimberly is directed by God to perform laying-on of hands or psychic surgery. She can “scan” or see into the body faster and more accurately than the fastest MRI and thermography machines. Kimberly has healed and helped many thousands of people, removing tumors, restoring hearing, curing cancer, correcting immobility, and completely healing people of many types of physical and emotional disease through the Holy Spirit – Love. Kimberly leads miraculous worldwide healing events during which many are healed.

Alan Steinfeld is an amazing conscious spiritual speaker and unique insights. For the past 20 years, Alan Steinfeld has produced interviews with over 5,000 people, sharing intensive research on his television show New Realities, on Time/Warner cable. With close to 12 million views, his YouTube channel contains interviews with the leading-edge thinkers, paradigm shifters and religious leaders from around the world such as Deepak Chopra, John Gray, John Anthony West and Ram Dass.

Love donations are accepted. Thank You!