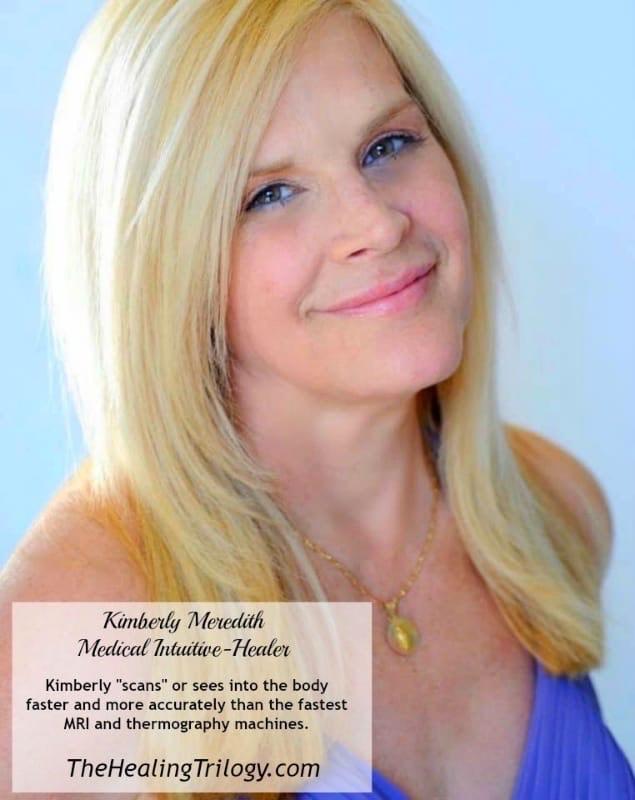 Previous recipients of Kimberly’s Medical Mediumship Health Scans have received vital medical information regarding all manner of significant medical conditions and illnesses, past and present, including such conditions as cancer.

When you attend this amazing event event, Kimberly will also lead you in a 5th-Dimensional guided breath meditation to help significantly improve your health and well-being.

Kimberly will also take questions from the attending audience on a number of topics.

This event will feature wonderful Sanskrit meditative music by the world-renowned musical artists DEVA PREMAL & MITEN, creators of such beautiful songs as “So Much Magnificence.”

Sign up today to join this miraculous free event, where you will witness amazing demonstrations of the Divine healing abilities for which Kimberly Meredith is a vessel. Take advantage of this incredible opportunity to receive a free Medical Mediumship Discovery Scan today!

Kimberly Meredith is a Medical Intuitive and Hands-on Healer. Blessed with a unique array of extraordinary healing and psychic abilities, Kimberly is quickly gaining recognition as one of the world’s most gifted Medical Mediumship Healers. Kimberly channels messages through her eyes’ blinking codes as a tool of communication from God, Mother Mary, Ascended Masters, and Angels. Kimberly is often compared to Edgar Cayce, the Father of Holistic Medicine, a Medical Intuitive, and the most documented psychic of the 20th Century.

Through her healing mediumship and blinking eyes, Kimberly is directed by God to perform laying-on of hands or psychic surgery. Through her spiritual X-Ray vision, Kimberly can “scan” or see into the body faster and more accurately than the fastest MRI and thermography machines,  uncovering and revealing all manner of medical condition and illness, both past and present.. Kimberly has healed and helped many thousands of people, removing tumors, restoring hearing, curing cancer, correcting immobility, and completely healing people of many types of physical and emotional disease through the Holy Spirit. Kimberly leads miraculous worldwide healing events during which many are healed.

To better understand her abilities, Kimberly was recently invited to undergo testing with Dr. Norm C. Shealy, founder of the American Holistic Medical Association, and a neurosurgeon with over 45 years spent working with spiritual healers. The proof is in the testing. The results were profound. Dr. Shealy’s tests of Kimberly recorded her ability to heal even through walls. Dr. Shealy concluded that Kimberly appears to emit scalar energy, a unique type of energy associated with genius inventor Nikola Tesla. In 2017, Kimberly was selected by PsyTek Subtle Energy Laboratory and Research Facility to undergo ongoing tests to further understand the inner workings of her talents. In 2019, Kimberly was invited to be tested at the famed IONS Institute of Noetic Sciences, founded by Apollo astronaut Edgar Mitchell and headed by the eminent scientist Dr. Dean Radin. After participating in multiple double-blind scientific studies, Kimberly’s healing abilities are beginning to reveal the convergence of God, Spirituality, and science.

Kimberly is a highly-regarded frequent guest on numerous nationally-syndicated radio shows and podcasts, where she demonstrates her healing Medical Mediumship for people listening around the world. Many have been healed simply by listening to the sound of her voice on radio and YouTube.