AUGUST 24 ALL YOU NEED IS LOVE 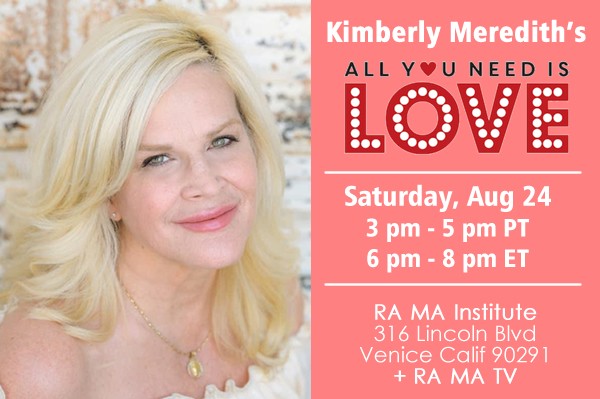 We all know someone whose life has been affected by cancer, such as breast cancer or one of the many other kinds of cancer. These are the women,

We all know someone whose life has been affected by cancer, such as breast cancer or one of the many other kinds of cancer. These are the women, men, and children we love: our grandparents, mothers and fathers, daughters and sons, wives and husbands, sisters and brothers, our neighbors and our best friends. Think about the many people in your life. Join The Healing Trilogy August 24 at 2pm PT at The RA MA Institute and be part of a movement to help cancer survivors live longer, healthier lives. We are celebrating Cancer Awareness and love with a tribute to The Beatles’ music and “All we need is Love.” Love is a very important part of healing us.

As part of this special Saturday Service, I will be selecting members of the attending audience for pre-screening of all kinds of cancer, especially breast cancer.

* How to heal yourself * Self-protection tools * Organic holistic living and Nutrition * Boosting your immune system * Avoiding toxic exposure to mercury and plastics * Exclusive information about water * Getting active and exercising * Eating healthy * Mental health, including getting enough sleep and managing stress * Avoiding unhealthy behaviors such as smoking, texting while driving, and not wearing a seat belt or bicycle helmet

Additionally, I will be giving teachings on God Consciousness. You can learn to tap into Higher Dimension to be closer to God and to permanently heal yourself. In this way, you can move forward joyfully in all aspects of your life.

This is a truly miraculous healing event where everyone can be healed in the 5th Dimension.

Get Your In-Person or Streaming Tickets Here

The Healing Trilogy proudly welcomes all people of all backgrounds to join us in Immense Grace and Peace to Empower others in Prayer and Healing. We invite you to join us in Witnessing the Awakening to Worldwide Peace, Healing, Love and Harmony. We are here to help you awaken your Gifts. Come together to Unite as One in Love and Gratitude. We believe God is Love.

Come join our Spiritual Service for a wonderful afternoon that will include:

I can’t wait to see you all! Come join me in witnessing the Holy Miracles that God has in store for us all!

Blessed Ormus Cream and CD-Roms for Purchase at Events

As a member of respected rock bands Crowded House and Supertramp, Mark Hart has established himself as a gifted multi-instrumentalist. For more than two decades he has contributed his talents to such critically acclaimed albums as Crowded House’s “Woodface,” “Together Alone,” “Time on Earth,” and “Intriguer” as well as Supertramp’s “Free as a Bird,” “Some Things Never Change” and “Slow Motion” (which he co-produced). He has also played with Ringo Starr’s Roundheads since 2005. He can be seen in Ringo’s PBS Special ’Soundstage’ at the Genessee Theatre from 2007.

Mark has two solo records: Nada Sonata from 2002 and The Backroom from 2014. He has also scored several films: “The World’s Greatest Gunfighter”, “Life Among the Cannibals” and “Mockingbird Don’t Sing”. He is currently scoring the soon-to-be-released film “Smalltown, Wisconsin”.

Jon Cornell is a new addition to our musical lineup. He is a bass player with the Saturday Night Live Band among other renowned bands and has performed in countless world tours

Ryan has been an established recording and touring drummer for over 20 years. He has worked with many acclaimed artists, including  Matchbox 20. He recorded and toured the world for their album, Exile on Mainstream. Ryan is a founding member of the Boston based trio, The Push Stars. Ryan has recorded and toured many albums with the band since 1995. The band has had many songs featured in film and television. Ryan has had the pleasure of recording and touring with Tonic, Philip Sayce, Pearl Aday, and others. His drumming was also featured on the song “Wrench and Numbers” in several episodes of the FX Television series, Fargo. Ryan is currently touring with Pearl in support of her new album, Canyon and Country Revelry. The band is scheduled to play the Woodstock 50 festival in August.

When Ryan isn’t drumming, he is spending time with his family, providing Cranial Sacral massage therapy or baking sourdough bread.

Steve Dempsey musical composer was first introduced to the piano when he was about 4 or 5 years old and instantly felt a special bond and calling to play music. He enjoys composing his own music and feels the influence from all genres and styles.